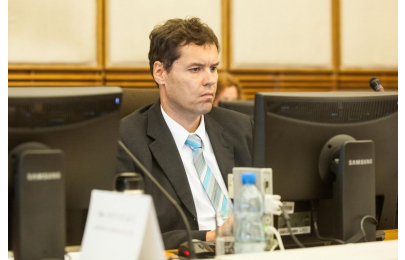 BETTER collection of taxes and positive economic developments have boosted state coffers more than the Finance Ministry originally forecast. The latest prognosis by the Financial Policy Institute (IFP), a think tank at the Finance Ministry, has increased revenues from taxes and levies by hundreds of millions of euros for the years 2015-2019.

"This prognosis is a result of good news about the positive development of [Slovakia's] economy from the viewpoint of the economic growth and the labour market," said Finance Minister Peter Kažimír when introducing the latest prognosis. The state will collect eur489 million or 0.6 percent of GDP more in taxes and levies for 2015 when compared to October's estimate, according to the tax prognosis published on February 15. Revenues will rise eur410 million in 2016, eur369 million above the 2017 estimate and eur444 million more in 2018. Kažimír attributed it to higher collection of the value added tax (VAT), corporate tax, while noting that other tax revenues increased too. "What is very important, out of additional revenues, this sum, eur290 million or 60 percent, we ascribe to better collection of taxes and levies," said Kažimír.

"People and companies are paying taxes more properly, and the state has learned to collect them in a better way," said Kažimír. He also pointed to an end of a decline in collection of excise taxes on mineral oils and a favourable situation of Slovak companies, whose profits are forecast to have increased by 7.9 percent in 2015 compared with the previous year. In total, corporate tax revenues are forecast at eur2.684 billion and revenues of income tax paid by private individuals should amount to eur2.471 billion. Total tax and levy revenues should be eur22.9 billion. "The fact that our companies are profitable speaks about a strong economic growth," said Rastislav Machunka of the Federation of Employers' Associations (AZZZ). Slovakia's economy grew 3.6 percent in 2015 with the IT, construction, automotive and service sectors thriving, according to Peter Kremský, executive director of the Business Alliance of Slovakia. Based on IFP data, Slovakia has managed to increase the effective VAT rate, when it amounted to 14.6 percent during the third quarter of 2015. This means the best result since the low of 12.1 percent during the third quarter of 2012. Slovakia has a long-term problem with effectiveness in VAT collection. Ivan Švejna of the opposition party Most-Híd, cites growth in neighbouring economies as the prime explanation for the better revenues, and pointed to still ineffective tax collection in Slovakia. "Tax collection is better, but in comparison with what?" asked Švejna during a discussion on the TA3 news channel. "The effective rate is far from optimum and we are still on the tail of the EU in terms of effectiveness of collection, for example VAT." Based on a document of the European Commission from September 2015, Slovakia reported the third biggest VAT gap in the EU, after Romania and Lithuania in 2013, reaching 34.9 percent. The EU average was 15.2 percent. The EC defines the VAT gap as an indicator of the effectiveness of VAT enforcement and compliance measures based on the difference between the amount of VAT actually collected and the VAT Total Tax Liability which is an estimated amount based on the VAT legislation and related regulations. Kažimír agrees that there is a huge space for improvement. "I publicly admit that if we got at least to the European average in VAT evasions, we would have eur800 million more in the state coffers," he said.

What to do with the money

The additional prognosticated revenues of eur489 million in 2015 will help the state to achieve the planned public finance deficit of 2.5 percent. Out of additional funds of eur410 million in 2016, eur30 million will go to health insurance companies, eur130 million will go to the social security provider Sociálna Poisťovňa, and eur110 million will flow into accounts of municipalities. The remaining eur140 million will be an income of the state that will keep it as a reserve for supporting investment, according to Kažimír. "The rest is on the next government [to be created after the March 5 parliamentary election]," said Kažimír, adding that the latest forecast gives a good background for achieving a balanced budget in 2018. The tax prognosis is for now a preliminary forecast by economists, the European Commission will give its assessment in May.

The arrival of the British carmaker Jaguar Land Rover (JLR) should have a positive influence on tax revenues. The carmaker plans to start construction of its brand new plant near Nitra later this year, with production planned for 2018. IFP prognosticates that already in 2016 this (pounds) 1 billion investment to be supported by investment stimuli of eur130 million will channel eur15.6 million of tax revenues into state coffers. In 2017 the revenues should increase to eur45.6 million, in 2018 to eur110 million and in 2019 to eur220.4 million. After the carmaker launches production, the IFP forecasts the tax revenues at eur265 million. The IFP estimates that especially JLR's contribution to the growth of employment and wages in the economy and the resulting consumption of employees as well as assumed profit of the carmaker and its subcontractors will reflect in higher tax revenues. "The investment of JLR is so huge that within direct investments it can be compared with carmakers PSA Peugeot Citroen and Kia Motors Slovakia put together," Zdenko Štefanides, analyst with VÚB banka, told the Hospodárske Noviny daily.